SQUATTERS CAME HERE IN 1492, NO ONE OWNS ANYTHING 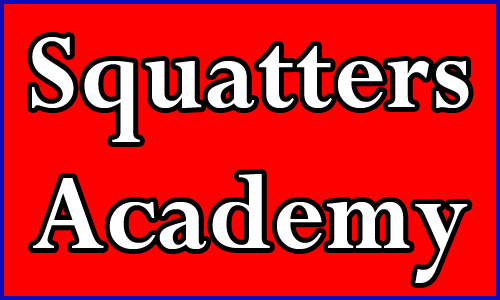 Squatting is the action of occupying an abandoned or unoccupied area of land or a building, usually residential, that the squatter does not own, rent or otherwise have lawful permission to use.

Squatting is a worldwide phenomenon and tends to occur in people who are poor or homeless that find empty buildings to occupy for housing.

There were over 2 million squatters worldwide in 2010 or more
.
If current trends continue, this number will increase to 5 million or more by 2020.

Is a problem, or a symptom, of a housing shortage, unemployment, illness, unaffordable housing, lack of shelter space, and, and.

In many countries is a civil conflict between the owner and the occupants.

Property law and the state have traditionally favored the property owner.

However, in many cases where squatters had de facto ownership, laws have been changed to legitimize their status.

Squatters often claim rights over the spaces they have squatted by virtue of occupation, rather than ownership;

in this sense, squatting is similar to (and potentially a necessary condition of) adverse possession, by which a possessor of real property without title may eventually gain legal title to the real property. According to Wikipedia.

Let take a brack and view some wonderful videos 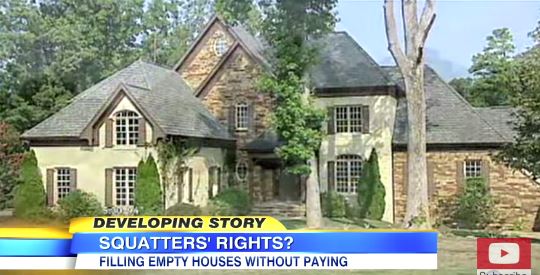 Over-100,000 Chinese millionaires have houses in Vancouver

At 18:35 ten houses on the street are empty, something to think about.

Mansion for sale, so why is no one buying?

Many houses in the area are empty. Opportunity for homeless and Squatters.

A Michigan man is moving in and claiming ownership of vacant homes in foreclosure.
Realtors are unable to sell the properties and police have been unable to force him out.

Marc-Andre Proulx this is the end of the world we know.
Blade of Unity Clearly law enforcement isn’t doing anything, that’s why News channels cover the issue, and the term “nothing is being done” is described. 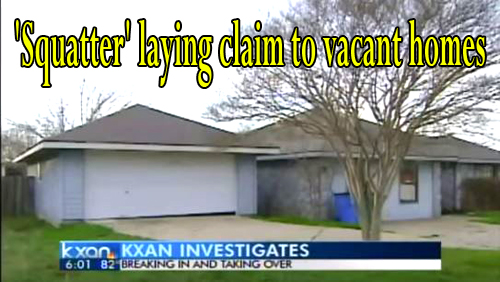 Squatters Are Taking Over Las Vegas

Agnes Cleary It's very telling that the city of LV sees squatters as the problem, not homelessness.

Sally Clay We r going into another recession, all across the US, Expect more situations like this, and more homelessness.
The rents keep going up. How are regular taxpayers going to survive?
mark Anderson so I lost my job or whatever, so ill just live here, it's not mine but ill just take it anyway
obsolete optics You know the system doesn't work when we have more empty houses than homeless people. 1 in 7 American houses is empty. 1 in 402 Americans is homeless. 24 empty houses are available for each homeless American.
savannah Silbernagel you know I wouldn't mind squatters if they kept up with the house, didn't vandalize it, and didn't bring crime with them.

Ownership is the state or fact of exclusive rights and control over property, which may be an object, land or real estate, or intellectual property.
Ownership involves multiple rights, collectively referred to as title, which may be separated and held by different parties.

possession is the control of a person's intentional exercises toward a thing. In all cases, to possess something, a person must have an intention to possess it. A person may be in possession of some property. Like ownership, the possession of anything is commonly regulated by the country under property law.

In civil law systems, personal property is often called movable property or movables – any property that can be moved from one location to another.

The concept of possession developed from a legal system whose principal concern was to avoid civil disorder.
The general principle is that a person in possession of land or goods, even as a wrongdoer, is entitled to take action against anyone interfering with the possession unless the person interfering is able to demonstrate a superior right to do so.

Different parties may claim an interest in the property by mistake or fraud, with the claims being inconsistent of each other. For example, the party creating or transferring an interest may have a valid title, but intentionally or negligently creates several interests wholly or partially inconsistent with each other. A court resolves the dispute by adjudicating the priorities of the interests.
According to the Indian property law, it defines the ‘Transfer of property means an act by which a living person conveys property, in present or in future, to one or more other living persons, or to himself and one or more other living persons; and "to transfer property" is to perform such act.

In this section "living person includes a company or association or body of individuals, whether incorporated or not, but nothing herein contained shall affect any law for the time being in force relating to the transfer of property to or by companies, associations or bodies of individuals.

Historically, leases served many purposes, and the regulation varied according to intended purposes and the economic conditions of the time. Leaseholds, for example, were mainly granted for agriculture until the late eighteenth century and early nineteenth century, when the growth of cities made the leasehold an important form of landholding in urban areas.

The modern law of landlord and tenant in common law jurisdictions retains the influence of the common law and, particularly, the laissez-faire philosophy that dominated the law of contract and the law of property in the 19th century. With the growth of consumerism, the law of consumer protection recognized those common law principles assuming equal bargaining power between parties may cause unfairness. Consequently, reformers have emphasized the need to assess residential tenancy laws in terms of the protection they provide to tenants. Legislation to protect tenants is now common.

Squatters Rights Law and Legal Definition. A squatter's right is a legal allowance to use the property of another in the absence of an attempt by the owner to force eviction. This right may eventually be converted to the title to the property over time by Adverse Possession if recognized by state law.

If the police declare this a civil matter and won't remove the squatter, start the eviction process. Once you serve the eviction notice, you could get lucky, and the squatter might leave.
If not, you'll need to file an unlawful detainer lawsuit, which is the formal way to evict. Make sure you follow your state's laws

A long-term squatter can become the registered owner of property or land they’ve occupied without the owner’s permission.

Get legal advice from a conveyancer or solicitor if you’re a squatter in a property and want to claim ownership.

Aboriginal title  Prior to the establishment of the United States title to Indian lands in lands controlled by Britain in North America was governed by The Royal Proclamation of October 7, 1763.

This proclamation by King George III reserved title in land to the Indians, subject to alienation only by the Crown.

This continued to be the law of Canada following the American Revolution.

In the United States, the Indian title is the subservient title held by Native Americans in the United States to the land they customarily claimed and occupied. It was first recognized in Johnson v. M'Intosh, 21 U.S. (8 Wheat) 543 (1823).

It very early became accepted doctrine in this Court that although fee title to lands occupied by Indians when the colonists arrived became vested in the sovereign – first the discovering European nation and later the original states and the United States – a right of occupancy in the Indian tribes was nevertheless recognized.
That right, sometimes called Indian Title and good against all but the sovereign, could be terminated only by the sovereign act.

Once the United States was organized and the Constitution adopted, these tribal rights to Indian lands became the exclusive province of federal law. Indian title, recognized to be only a right of occupancy, was extinguishable only by the United States.

The usual method of extinguishing Indian title was by treaty.

Do not try to remove the squatters yourself using force or the threat of force - you’re committing a crime if you do.

You can only apply for an IPO if it’s been 28 days or less since you found out your property’s been squatted.

Fill in an application for an IPO and send it to your local county court.

The court will send you confirmation of your IPO within a few days. They will also send you documents that you must give to the squatters within 48 hours.

After being served with an IPO squatters can be sent to prison if they do not:

To get final possession of the property, you must make a claim for possession. You can do this on your IPO application form or separately online.

Make a claim for possession if it’s been more than 28 days since you found out about the squatters.

Owning and renting a property

Your council or housing association must give you a written warning notice that they plan to evict you. The notice is normally either at least 4 weeks or 2 months, depending on the type of tenancy you have.

However, they can start eviction proceedings immediately if you’re responsible for:

For most types of tenancy, your council or housing association must also tell you why they’re planning to evict you.

The quicker you reply to the written notice, the better chance you have of keeping your home. If you ignore it and stay on the property, or the council or housing association is not satisfied with your response, they may apply to the court for permission to evict you.

If you’re facing eviction over unpaid rent, before taking you to court the council or housing association must:

These steps are known as the ‘pre-action protocol’.