This book written by Spryros Peter Goudas reflects a period of severe discomfort with pain in his back, floaters in his eyes impeding his vision.

The book portrays a wonderful story with a happy ending with a intense period of pain and restriction of movement almost to the point of paralysis and blindness. 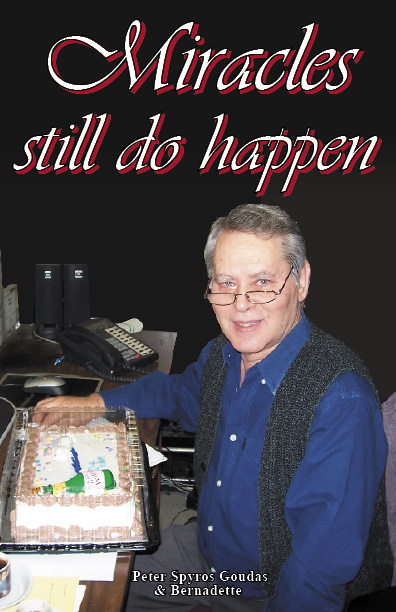 Within the story, the name of Saint Paraskevi emerges and we have incorporated a link for anyone who wishes to know about her.

Miracles Still Do Happen has been translated into many languages and has been printed in several magazines and newspapers.

Approximately one million copies have been circulated and has been a source of inspiration to many, even people in critical care or even in their final moments, after reading this book, still have hope.

This book is not aimed at enticing you to change your religion, we have placed it in this section of FlyerMall as a source of inspiration.

It is well known that Spyros Peter Goudas does not attend Churches very often, however, examine his Letters of Appreciation in this link and you will be amazed at the extent of his generosity and philanthrophy to many different religious organizations and associations, homes for the aged, homeless, food banks, etc., etc .