My name is Peter Spyros Goudas, and if you google this name, it will link to my biography; to read up my story you will know that I was once homeless when arriving in Canada in 1967.

There are many reasons why people become homeless. We are not here to judge them.

Our business is to make certain that we do our part without criticizing them.

That’s the last thing they need. Even if you ask the question” You may not get the answer. Some of them have lost touch with their own identity, to begin with.

I wish to inform you that the United Nations, The world health organization, Unicef, The united way, Salvation army, etc to name a few, can do absolutely NOTHING for these unfortunate people.

They need to be fed immediately, this instant.

They need to have a place to sleep right now, not tomorrow.

These women need to be able to clean up themselves TODAY, not next week.

You see them sleeping on corners in big high traffic cities, some are accompanied by their loving pets.

I read in the comments section as people wondered all sorts of things such as:

How did they pay for tattoos?

When was the last time they had a bath?

How can they afford a pet? Etc.

Why they are not quit smoking?

Please do not engage in criticizing or bad-mouthing them.

One day it may become your turn to face the same situation.

Will you have their courage and resilience?

Instead of spending big money $ 50-100 for an expensive big steak with beautiful dessert and fancy wines in restaurant outings, reflect for a moment on how a few dollars can help one or two of them.

Please refrain yourself from asking them to follow you at a nearby restaurant as some of the restaurant managers do not allow them in.

There are many reasons why they can’t get a job and so many more why they do not have a place to sleep.

Lawyer: Mike Papantonio talks with Brigida Santos about why San Diego California has been arresting its homeless population.

I am not asking you to save the world, therefore, if you see one of them on a corner of the sidewalk while passing by, open your heart and be privileged by giving them something; while not expecting anything in return.

Do not even expect their gratitude and thanks. Please remember, your kind-heartedness will be noticed by God and you will be generously and abundantly rewarded somehow.

Standing off the street, on a corner all alone, As if he’s hiding, his chagrin in the dimness
Should he be blamed, being born poor to the bone, Is he to blame. if he’s a wreck…
If he’s a wreck of life’s grimness
[Refrain:]
Oh, street bum. without a loved one without a mother, or home to keep from
Oh street bum, inside the blizzard’s raging wind a sparrow stripped plum
Oh street bum
Yet even he, maybe someday he will come through in finding a dream, a warm bosom, just a haven in finding two arms, to bestow him wings anew and two sweet lips, to bring him back…
to bring him back his courage even

How poor people survive in the USA

ON THE STREETS -- a feature documentary on homelessness in L.A

How to survive in Los Angeles without a home

Homeless and Hopeless in Detroit

In LA, poverty on Skid Row defies US’ humane reputation

Searching for Hope: Homeless in Sacramento

A Camp for the Homeless

The Poorest of the Poor - On the Edge of Europe

US Poverty - No Way Out l We the People

In hard times, poor Americans struggle to feed their families

U.S.: A Year of Struggle at the GAP Food Bank

Growing poverty in America The Economist

Land of the Free, Home of the Broke?

Buried By Debt: The Dangers of Borrowing Part 1 of 2

In Debt We Trust America Before the Bubble Bursts-

Employed but still homeless, working poor say "Homelessness can happen to anybody"

TheDonna1959 In response to Jose Stickman: To be ill is one thing, but to kick a family when they are down...shame on you! Hope you never become ill, homeless, and hungry!
stevenbe4201 Even if they save enough money they will more than likely not pass a rental application.

The American Nightmare: 10 Years After the Financial Crisis

Living out of a storage locker for 2 months, in style!

Living in my truck- Why I never sleep in parking lots

Homeless In a Uhaul - Living The Van Life

Getting By: An Envision San Diego Documentary

In LA, poverty on Skid Row defies US’ humane reputation

The 10 MOST HOMELESS CITIES in AMERICA

Over two dozen people say they were scammed by a landlord who rented them rooms in a North York home, which were in fact already occupied and not available. Faiza Amin with several of the would-be renters who are left with no place to go.
Chris Van Bekkum This kind of scams should result in jail time.
Aria Jade This "landlord" needs to be in jail...
Clive Lawrance Put a lien on the house if he is guilty.

Homeless woman facing fines for building herself a home

Darlene Necan is hoping she won't become homeless again. Ontario says she's built her home on crown land. But the Aboriginal woman says her family has lived there for years.

The man building tiny homes for the homeless in Los Angeles

The mayor of Los Angeles has declared a homelessness crisis. As the city struggles to respond, one man has his own unique solution. But can he evade authorities to get people off the streets?

Now an Official Selection to the 2020 Twin Cities Film Fest - Told through the residents who lived it, "The Wall" looks back at the saga of the 2018 Native American tent community in Minneapolis. Throughout the film, residents share openly and honestly about their journeys to the camp, their lives there, and their hopes for a better future. “The Wall” offers these stories within the backdrop of the overall story of the camp: its growth, the Twin Cities community response, and the eventual transfer of residents to shelter. "The Wall" provides a unique and raw look into the struggles of American poverty, addiction, and homelessness. As a result, viewers walk away with a better understanding of what might be done to address these issues.

Canada's homeless population could grow as pandemic drags on

Ktown for All Helping Homeless People in Los Angeles’s Koreatown

A documentary produced by Myron Mayne, Cynthia Paulo, and Vadani Jay. Debbie, Ricky, and Pandora share their personal story of how they became homeless and what it's like to live on the streets in the city of Toronto. Matte Black, the founder of Heroes In Black, talks about his experience being homeless and what he is doing to help those in the streets. Richard Brown, a pastor at Kingsway Community Life Centre and social worker, adds expert insight to homelessness in Toronto.

Without A Roof (Homelessness in TORONTO)

"Without a Roof" is a raw 30-minute emotional documentary recording the stories and experiences of homeless individuals from the streets of downtown Toronto.
This documentary made some time ago, now 100 times worst.

The Truth about the Police and City Harassment of the Homeless and people that help them. The Laws in Phoenix that can get someone arrested for helping the Homeless, and other city codes against the homeless. This also shows the humanitarian effort by the few that make a huge impact on their community. One World Voice team put this video together to show the truth and find solutions. www.oneworldvoicefoundation.com

Vancouver has been voted the best city in the world to live in but it has a dark secret – the downtown east side ghetto.

With the roughest neighborhood and the highest crime rate in North America, living conditions here are on a par with third world countries, and homelessness and addiction are rife.

And yet provisions for those in need couldn’t be better. Misha Kleider, in an effort to find out what is going wrong, goes undercover for a month in December leaving behind his apartment, his friends, and his wallet to see first-hand what life on the streets is really like.
Starting with nothing but his underwear he journeys through the institutions and services available to the homeless and makes some startling revelations along the way.
The experience upsets any pre-conceived notions about how to “fix” the problem and what begins as a social experiment in the vein of Orwell’s’ Down and Out in Paris and London takes a darker turn as Misha connects with the real residents of the downtown eastside ghetto; the addicts, the dealers and the diseased.
As Misha becomes more involved in this world, the film speeds towards a shocking finale that will leave you breathless and in awe.

Streets of Plenty is a fearless, fast-paced, and entertaining exploration of what it means to live on the streets of North America’s worst ghetto. (In the Vancouver article)

Vancouver, Canada. Where we see the dark side 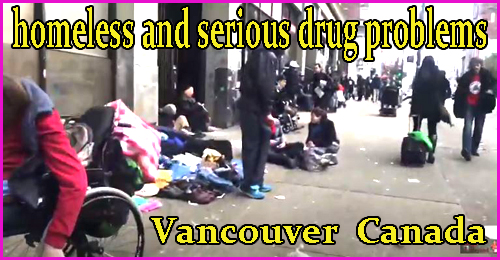 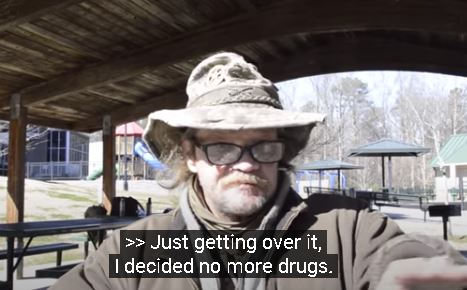 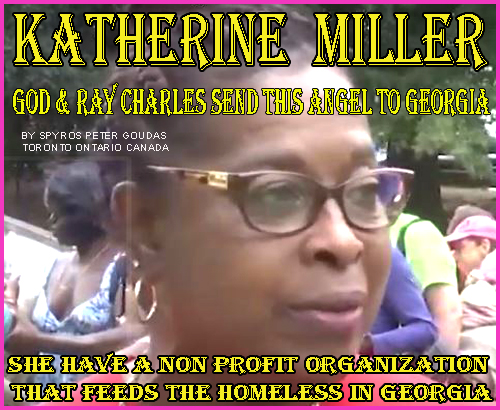