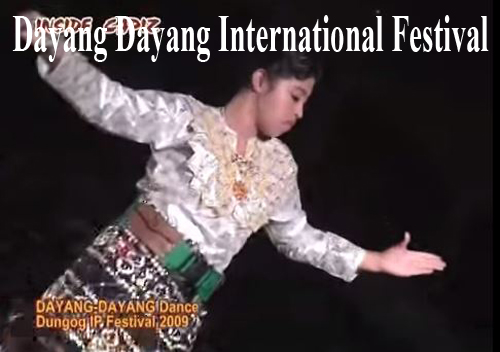 Dayang - Dayang is a Muslim dance means "Princess of the first degree" a title given only to the daughters of the Sultan. It was presented during the Philippine Festival Barrio Fiesta last September 28-29, 2013 at Yamashita Park, Yokohama City in Japan. 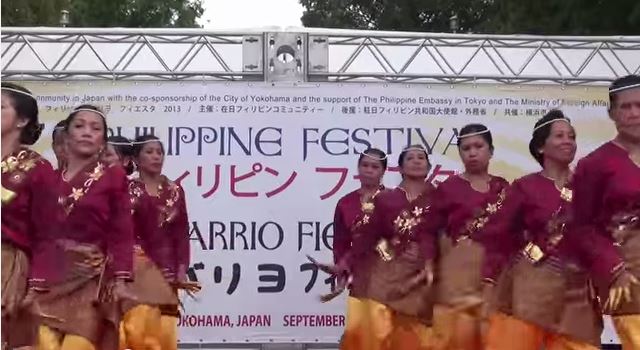 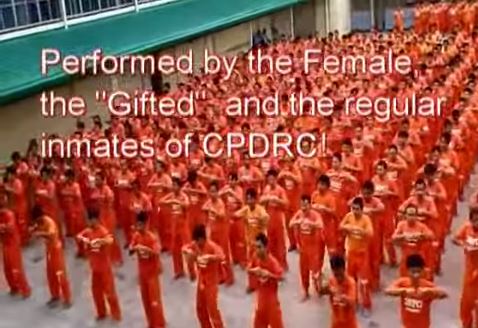 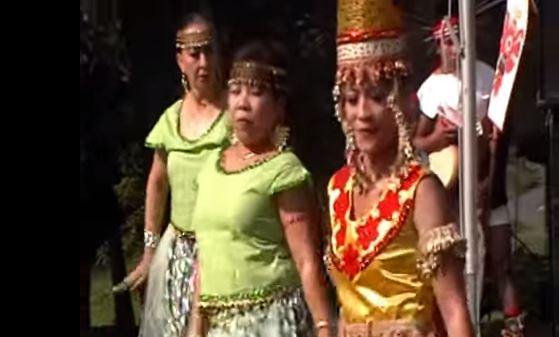 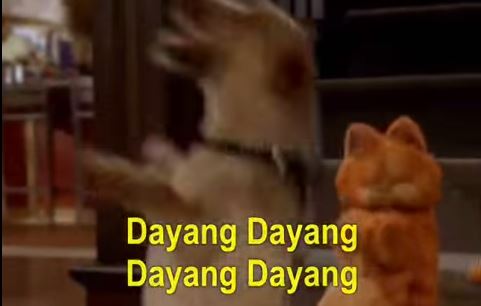 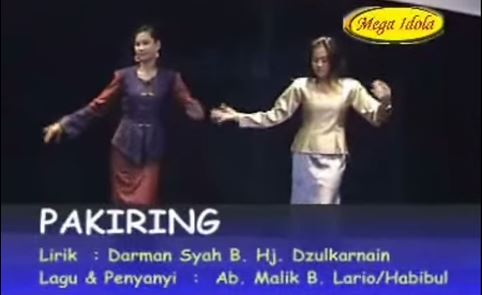 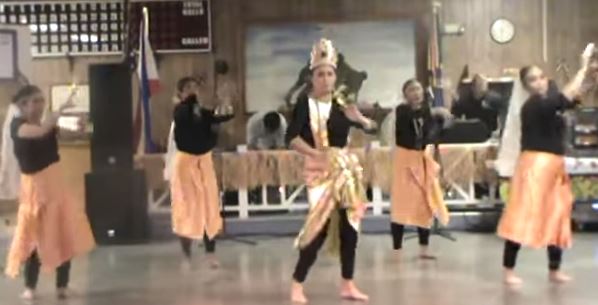 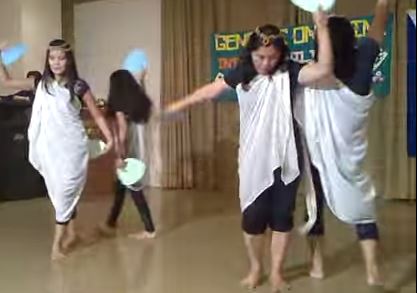 EGYPTIAN DANCE WITH THE TUNE OF DAYANG DAYANG 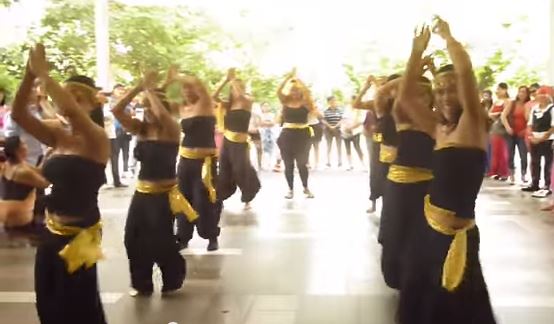 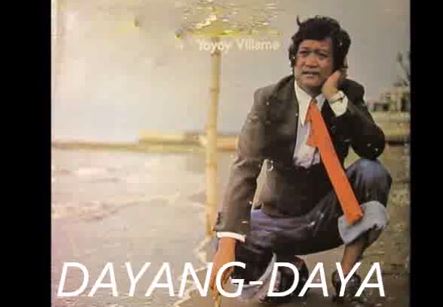 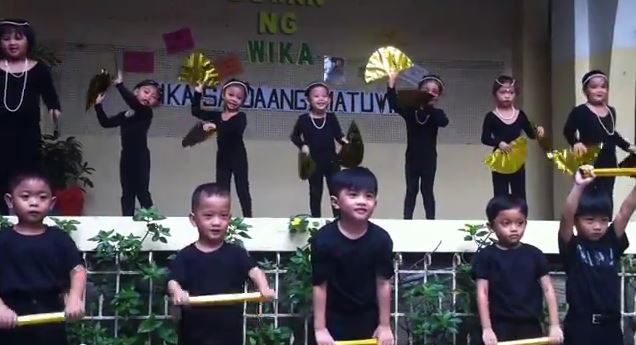 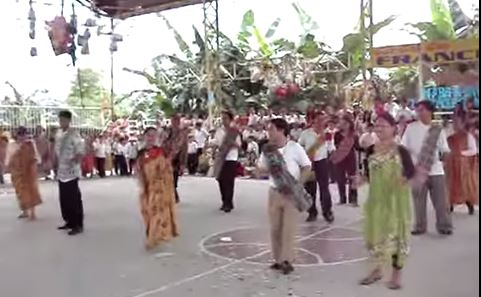 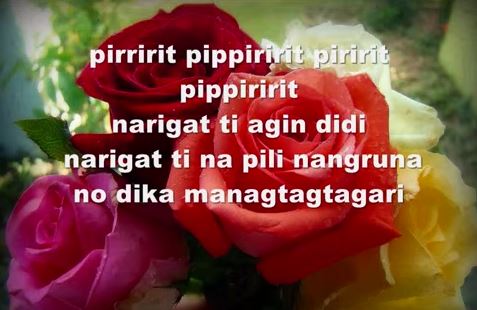 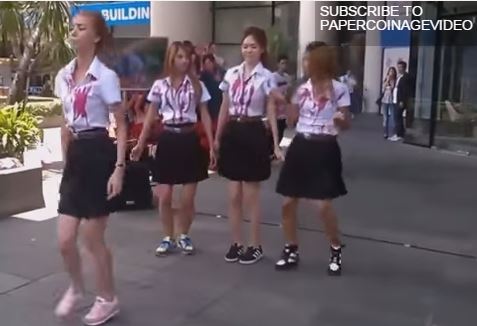 This is the truly original version of the phenomenal hit Dayang Dayang that became very popular in the Philippines for almost ten years from around 1996.

This live performance from an unknown artist was never commercially published by the recording companies in the country. Instead, numerous cover versions were commercially released.  It remains a mystery as to who performed and recorded this song. 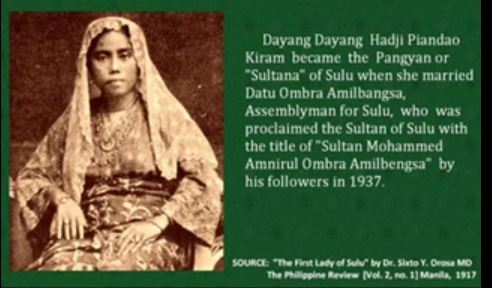 Dayang: Princess of the First Degree

Hadji Dayang Dayang Piandao is the first lady of Sulu. The title Dayang Dayang, by which she is popularly known, means "princess of the first degree", a title is given only to the daughters of the Sultan.

She was born in the year 1884. Her mother was Hadji Amina and her father was Sultan Baddaruddin, one of the sons of Sultan Jamalul Alam and Pangian (Sultana) Lana. She is the youngest of seven children, the rest having died at a tender age.

Her father died before she saw the world and Jamalul Kiram, brother to the deceased who succeeded the latter as Sultan, adopted Dayang Dayang as his daughter and heir to all his riches and property.

She lost her mother in 1912, who has been one of the wives of Sultan Jamalul Kiram. She mastered the Koran at the age of eight after one year's study, which usually requires from three to five years of constant application.

She made the pilgrimage to Mecca at the age of 12 in company with Sultan Jamalul Kiram, Hadji Butu, etc., spending about one year in the sacred city. Since childhood, she accompanies the Sultan in his yearly visits to Sandakan and Singapore where he has some property and other interests.


During the life of her mother or until she was 28 years old, Dayang Dayang was not allowed to do any work. She was not even allowed to walk from her residence to the next house, else she was severely whipped or otherwise punished by her mother, on account of which one of her fingers was broken.

Before slavery was abolished, the Sultan disposed of some five hundred slaves, and plenty of them was ever ready to carry her from one place to another where she wanted to go and serve her in any way she pleased or her whims dictated. Five women slaves were needed to give her a bath, one takes care of the soap, another of the towels, a third cleans her hands, a fourth her feet, etc. Five sleep by her side as special maids.
Before the abolishment of slavery, the Sultan used to keep as many concubines as he cared for, usually twenty or thirty at a time who are calculated to have numbered at least 500 in all, and all of these were Dayang Dayang's slaves.

The Sultan could not and cannot give money, presents, etc., to his slaves, concubines and even to his wives and near relatives, except through Dayang Dayang. This shows how much influence she exerts over him. It is, however, the right sort of influence, as it is generally understood she stands between him and ruin.


Although Dayang Dayang has no more slaves she keeps as many servants as her needs require, and she still is the mistress of the Sultan's wives and concubines.

From the time her mother died, she attempted to harden her constitution and began to administer the extensive property of the Sultan. She then became the most important private adviser to the Sultan, Kiram, Hadji Butu, etc.,

Intelligent as she is, and she proved to be an excellent executive and administrator. By common consent, Dayang Dayang is the most progressive of Mohammedan women.

She believes in the friendship and ultimate assimilation of Muslims and Christians and is exerting all her influence and efforts to bring about better relations between them.

She is quick to adopt what is good of others' customs. Her hospitality and liberality is widely known. She takes pleasure in entertaining friends at her house. Tourists find in her a kind hostess

In 1921 Dayang Dayang Hadji Piandao was appointed an agent of the government to encourage Filipino Muslims to send their children to school.

Dayang Dayang takes pride in being called a friend of the Filipino Christians and leads her people in any way better feelings could be brought about. Quiet and unassuming in public or in a crowd, she is in private and in intimacy a pleasant conversationalist.

Dayang married Datu Ombra Amilbangsa, Assemblyman for Sulu, who was proclaimed Sultan of Sulu by a number of his followers in 1937, with the title of Sultan Mohammed Amnirul Ombra Amilbengsa and she became his Pangyan or Sultana. 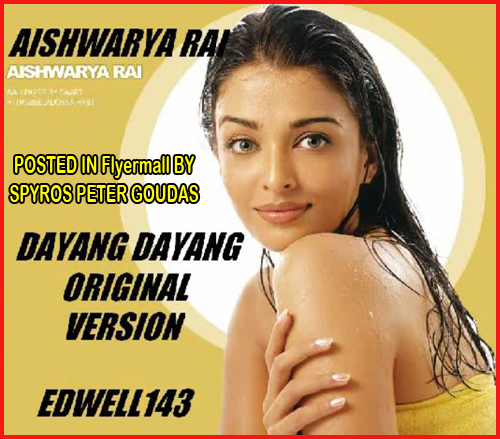 A tribute to Yoyoy Villame for his endless efforts in education through music.

Music should be the medium to educate our own children from any country, as it helps a great deal in memory development.

Mr. Goudas has a very good knowledge of which organizations really need his help, and he has been supporting them to the best of his ability.

In fact, one of the criteria for winning the Entrepreneur of the Year Award in 1993 was a large number of donations made to needy organizations.

It should never be forgotten that Mr. Spyros Peter Goudas himself has once, early in his career, gone through very tough times of sleeping in park benches and starving for food. He knows exactly how to recognize those who really need help, and he has never denied his support to them.

Peter Goudas arranged and shipped several containers of food and relief items to the devasted areas.

While watching his video you will notice Mr. Goudas begins by saying, “I just came back”
he has just come back but not from a vacation.
He was “away” making sure that all his outreach efforts for the holidays were going smoothly.

During the holiday season especially, Spyros Peter Goudas provides several shelters, food banks, churches, and other organizations with food items to make meals for the needy and less fortunate.

This he does without considering the age, color, race or religion of the people likely to benefit.

In closing this subject, we asked Mr. Goudas how he felt about the year 2013.
He responded, “Despite everything that went wrong in 2013, I am very pleased that I was able to help, to the best of my ability, numerous organizations and people in need. The Filippino situation was not a local occurrence; it was an international issue similar to the Olympic Games. I am very happy I took part in this game of life.

You can see Mr. Goudas on the video. He looks very calm amidst everything and intrigued by the creativity of YoYoy Villame’s composition. He seems very happy, light-hearted and worries free although, he has many issues to deal with on a daily basis.

On Behalf of all of us at the Goudas Foods organization in Canada and abroad, we wish him a Merry Christmas. May God maintain his health and strength as he continues to help not only us but, provides for others in need. 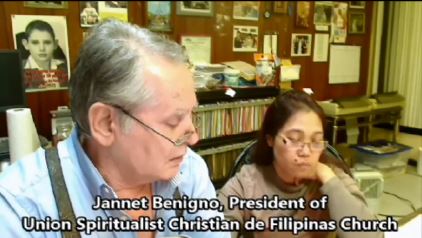