The Lady of the Sand has presented her new sand film "Beautiful Morocco" which was created for the Foundation of Her Royal Highness Princess Lalla Hasna of Morocco.

I was reached by the representatives of the Foundation and they asked me whether I can create something very special about their country, to leave the impression of the miracle as it always happens in my sand stories.

And at the same time to raise the consciousness about the ecology of their country, as one of the main goals of the Foundation of Her Highness is reaching the environmental consciousness among the citizens.
My name request -- as always -- was my artistic freedom, which was accepted with respect, and I appreciated that very much.

For more than four months I have been deeply studying the history and culture of Morocco, its art and people.
Studying that, I fell in love with the beauty which was on the border of Africa and Europe.

Then I started the process which was rather long and complicated but really exciting.

When the film was shot, it was presented to Her Royal Highness, members of the Foundation and citizens of Morocco.

I am really happy that they liked my film, that is a big honor to me and all my team, - Kseniya confesses. 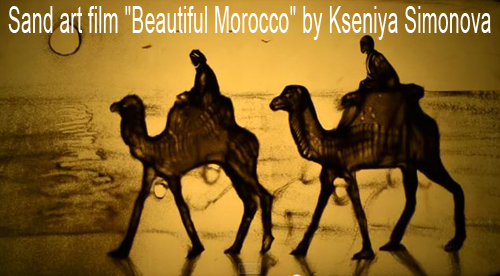 The Lady of the Sand Kseniya Simonova recreated dramatic and multifaceted history of Lebanon at the request of representatives of the government of the country. Her film was created to open Marathon in Beirut (Beirut Marathon) — one of the most significant events in the life of the Lebanese, uniting people in the country, when they get together to run through the streets of Beirut in the name of peace.

Kseniya Simonova's film «Run for Lebanon» is created in a typical for thr artist epic genre — in front of the viewer's eyes, one after another, march era — from the ancient city of Carthage to the present day, replacing the flourishing kingdoms, sunsets, the wars and the peace. At the end we see the Lebanese today, people who are longing for peace and unification.

According to Kseniya, it is the embodiment of all the history of the world, the winds of change "Beirut is the embodiment of the history : at various times it witnessed the most significant historical landmarks — Egypt , Phoenicia , Rome , Babylon ... All of them have left a trace , this trace we see today ... Three and a half thousand years old — the age of the sage .

Yes, it seems Beirut seen so much that surprise him by war or change the pages of history is impossible. But today its inhabitants — people who very much value the peace, cherish so much so that by all possible ways try to erase the memories of the recent war , fresh wounds .

This is quite understandable and very natural. Modern Lebanon in general and Beirut in particular — an eclectic , multi-cultural world , where neighbors Muslims , Christians and other religions , where the very structure of the state is an example of the unique mix.

I was extremely interested in working on this film , I'm very glad that I had the honor to show the Lebanese their Lebanon — but with my eyes. Beginning of the film is my very favorite era — the Phoenician period and Carthage , and the campaign of Alexander the Great .

In general , I am very lucky to be working on such films as «Beautiful Morocco» ( film created for Princess Lalla Hasna of Morocco ), «Bahrain» ( film created for a national holiday in Manama, where Ksenia portrayed by His Majesty the King ) , the film dedicated to His Royal Majesty King Rama the Ninth ( Thailand ), and now — Lebanon ... I open up new worlds and times , life, unknown to me before.

This is a great happiness", — says Kseniya. 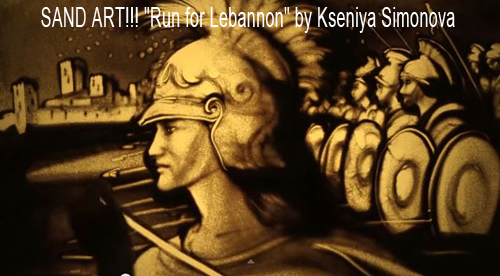 On 5th and 6th of January in Bangkok (Thailand) Kseniya Simonova presented a sand story about His Majesty The King of Thailand Rama IX. Devoted to his 84th anniversary, the sand story created by Simonova told about the great inventions of the King conserning the Environment, about His love of his people and of His country.

Kseniya was performing in the Royal Pavillion of Bangkok in a specially built hall in the presence of Her Royal Highnesty Princess Sirindhorn and the Government of Thailand.
The spirit of the sand fantasy of Simonova, the feeling which she expressed in her art work stunned the audience. "I was very happyto receive such reaction", - says Kseniya, - "This sand story had a very long period of preparations, I was very worried about how the people of Thailand will take it. The music for my sand story was written by His Majesty the King himself.
This music is really beautiful and inspiring. His Majesty is trully a genious person!"
After watching Kseniya's performance, the Princess of Thailand gave her flowers from herself and from her Father, the King as a present. Kseniya gave her Royal Hihnesty two discs with a sand film about the King which was shooted by her and the Ovation.
Tv (the Royal Television of Thailand) beforehand. 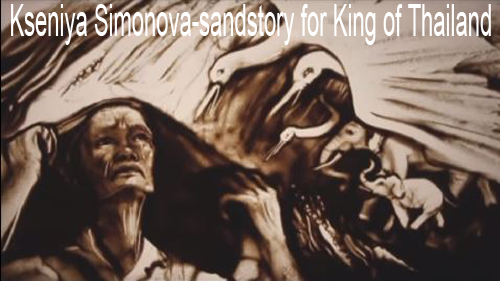 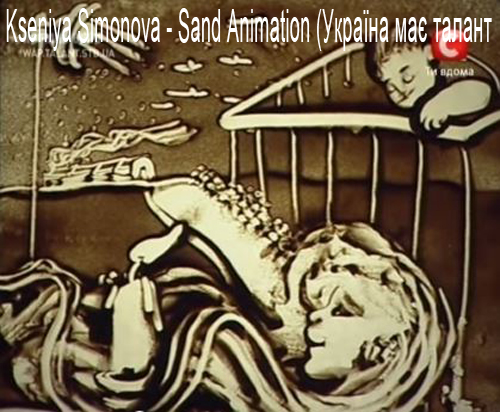 Since childhood, Kseniya dreamed of being more than just being a classical artist.

In her interviews she says:

"Since I was three, in my dreams I saw amazing pictures... when there was no Universe, just an eternal snow with huge long shadows of strange long people, mysterious and magic trails on the snow and strange pink light from a non-existing sun... It was so incredibly beautiful..." When little Kseniya woke up, she drew the pictures from her strange dreams in the air with her finger. Seemed like anyone could see her drawings.

She dreamed of becoming an artist who can draw by heart not by pencil.

"I believed that it was possible to attach a little twinkle or a star on my finger to make the pictures seen for everyone..." Kseniya's parents didn't want her to be an artist.

Kseniya explained the reason: "It is a constant struggle. I realized that and was ready to it.

If you chose this profession, you're fighting during all your life.

You do not enjoy everyday life- like comfort, buying the furniture... You're always looking for something more, and I...

Actually I was never interesting in a life of comfort, buying furniture and household.

" The idea to make a sand performance came not to Kseniya, but to her husband Igor Paskaru, who wanted to include that to a new project of his theatre "Private Collection".

Firstly Kseniya refused:"I immediately realized that this is the thing very difficult to perform.

It was sand -- not pencils or paints.

No fixation! How this can be used as a drawing material?!" But she felt she was close to her dream -- being an unusual artist who can be free from a pencil and paints.

At the same time, the situation was very severe -- their magazine was frozen, the business collapsed.

Kseniya and I gor were left on the wave of a crisis with a little son who was just 10 mounth.

"I had a terrible depression. Nothing was interesting for me, no colors around, just grey world...

I had problems with lactation and somehow had to calm myself. Igor said:

"Either we will go crazy or let's do something! What about the sand ?" I said: "Why not? "

- This is the first film I shot with no requests from the volunteers and family
members. I found Dima myself. Found and realized that film for this baby is ready.

It is a very, very beautiful and bright boy.

And yet, he is the namesake of my son and the same age with my son.

And I want this boy, like mine, to have a happy childhood , and most importantly - that he
lived! Now Dima has a very serious situation , I talked to his aunt.

So we ask for your prayers. Dear Friends, prayer makes wonders.

Dima is in Germany,where he had a long successful treatment.

But trouble came suddenly on August,2- we were informed that Dima had a RELAPSE and he
needs a bone marrow transplantation from his brother Arseny ... Account is terrible
and terrifying - 200,000 €.

Our money is not enough to pay even for the half operations!

We have to get on our knees and ask you about any help we can ! Information, moral, material. 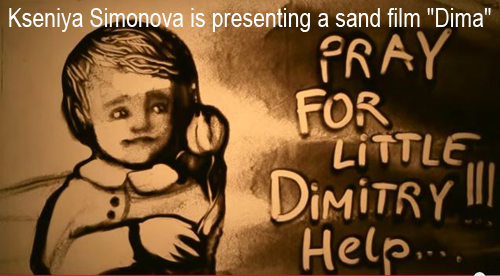 His association with the articles is no different from his association with various other foundations, charities and organisations and as such must not be interpreted as a specific inclination towards this religious belief system.

Should you view the letters of appreciation on Mr Spyros Peter Goudas website you will find evidence of his involvement with various religious and non religious organisations, provided you have enough time to read them.